Perfect for Storing & Installing Your Studs

Get An Edge On Your Competition!

The Stud Tree® is a horseshoe stud kit that puts everything that you need to apply studs to your horse’s shoes in a compact, highly-usable design… right at your fingertips.

The Stud Tree® comes complete with six sets (4 each) of the most popular size studs. Each stud is stored “finger tight” which keeps the threaded studs clean when not in use. They can be easily removed and installed.

It also comes with a pre-sized double-ended stud wrench that fits all of the 10mm square and 13mm hex studs, a pick for removing the plugs in the shoe, and a “tap” for cleaning the threads. The stud wrench screws together for added leverage.

Since all studs have a 3⁄8-16 universal thread, you can mix and match with the studs you already have and create your own custom selection from the variety of replacement studs. These equestrian studs include: grass studs, dirt studs, road studs, deep footing studs, mud studs, hunter/jumper studs, polo studs, and more.

It measures approximately 6.5 inches long and weighs about a po

Your Horse’s Traction on Various Terrains Could Make the Difference in Your Performance.

Are You Tired Of… 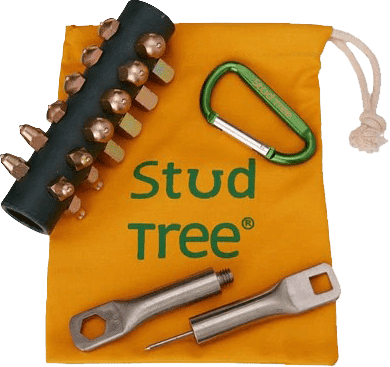 What Our Customers Are Saying

The Stud Tree given to us at the Olympic Games was great because it had choices of studs for any type of weather or footing we may have encountered. The studs were high quality and came in a convenient tree that made packing for a huge trip easy. Studding properly is important to ensure the horse doesn’t slip, and the stud tree studs helped A Little Romance gallop the country-course with confidence.

You have Successfully Subscribed!

0
0
Your Cart
Your cart is empty
Continue Shopping